Cyberbullying is an old issue wearing a new hat. Mainly, it involves verbal and emotional harassment in the form of messages, pictures, or privacy violations on the internet. Cyberbullying statistics show that it typically affects young boys and girls, and for a lot of victims, it has gotten worse after the pandemic started.

There are a lot of factors that determine the occurrence of cyberbullying, number one being the anonymity that the internet provides. Actually, data show that 9% of students aged 12-17 pretended to be someone else online, and cyberbullying has become the biggest safety concern for teachers.

In the article below, you’ll find out the latest cyberbullying statistics and facts to better understand the phenomenon and its devastating effects on teens.

Read further to know how you can protect your teen from digital threats. 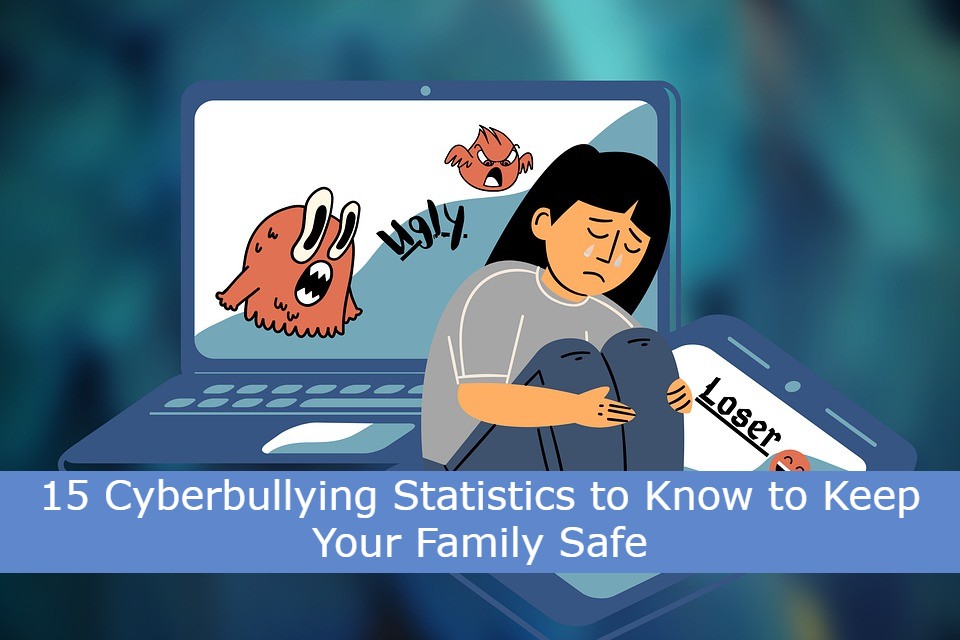 Numbers on cyberbullying prevalence and effects are shockingly high, and they are raising serious concerns for parents all over the world.

The history of cyberbullying and its forms

Cyberbullying is a rather recent phenomenon that started to get attention from mental health professionals and families after teen suicide cases increased. The cyberbullying statistics began to show worrying numbers on the frequency and degree once smartphones gained popularity and provided teens with unlimited access to communication devices.

From the mid-2000s, cyberbullying has become a more complex issue that affects adolescents and even young adults worldwide.

Cyberbullying can take various forms, some of them being generally perceived as lighter bullying and others as severe bullying. But abuse is abuse, and any of the phenomenon described below can be seen as an act of cyberbullying:

Two shocking cases that raised awareness on cyberbullying are those of Jessica Logan (18 y.o) and Hope Sitwell (13 y.o), American teens who committed suicide after having nude pictures of them shared on the internet by their boyfriends.

LGBTQ+ community students are usually more affected by cyberbullying, with about 50% of teens belonging to the minority experiencing a form of cyberbullying. In the USA, the case of Tyler Clementi, who killed himself after his roommate live-streamed a video of him kissing another man, sparked federal concern on the topic of cyberbullying.

Cyberbullying is a worldwide phenomenon, and it has devastating effects on teens, including increasing suicide likelihood.

Kids and adolescents are more and more aware of the cyberbullying issue and start to get concerned about their physical and emotional safety online.

Cyberbullying is occurring on multiple Social Media platforms, but some of them seem to be a propitious environment for harassment. As stated above, the most likely to get bullied over social media are teenage girls.

Why do people cyberbully, and why is it a problem?

Statistics found out that the most likely to receive and engage in cyberbullying are teenage girls who come from unstable family environments. Long-term observation from the same sample suggested that those who experienced cyberbullying in the first part of interviews tended to behave more like bullies in the later tests. Therefore, cyberbullying perpetrators are most likely to have previously received aggressive treatment and humiliation from peers.

In fact, the study shows that those who come from being a cyberbullying victim to be a cyberbully ranked highest in emotional and social difficulties scales (such as depression, anxiety, and social function).

The problem with traditional bullying and online bullying is that the victim is not always searching for professional help or adult support (especially in difficult families and school environments) and they can either attempt suicide or become the aggressor.

It results in the perpetuation of a dangerous phenomenon that is nowadays taken care of by lawmakers and professionals all around the world.

What are the effects of cyberbullying on a personality?

Encountering cyberbullying in teenage years can result in long-term emotional issues, and for some, it can even become a blockage in their career.

Cyberbullying affects a person’s self-esteem, in the long run, two-thirds of online bullying admit that being harassed impacted the way they were thinking about themselves.

Students who are experiencing bullying from peers are more likely to have depressive symptoms and poorer sleep quality, which can turn into learning and concentration difficulties, physical health issues, and mood disorders.

Although bullying does not always involve physical harm from the bully, it indirectly affects the victim’s health. 1 in 4 students who were harassed online used self-harm as a coping mechanism and some even started fantasizing about suicide.

Are there penalties for cyberbullying?

Countries around the world and certain organizations are working toward specific laws that can control and punish cyberbullying as other harmful crimes, but for the moment it has not become clear what the term cyberbullying involves and how it can become a self-standing penal cause.

In the USA there is no federal law targeting bullying or cyberbullying per se, but there are several regulations in place to address harassment or teasing in schools, especially when it has an offensive, repetitive and unwanted character.

Most schools have policies in place to deal with bullying and cyberbullying, and they are meant to do so by law, either suspending the bully or asking for legal protection for the victim, in extreme cases.

In Europe, there is also no specific law regarding cyberbullying in particular, but there are means that a victim can use in order to erase their internet data, to report racism, xenophobia, or sexual harassment for people under 18 years of age.

The European Union is funding multiple organizations which are taking care of particular cases in home countries and offer support with legal means and financial aid.

In most cases, cyberbullying is judged based on the existing laws regarding acts of aggression, abuse, and perpetual offensive and intimidating behaviors toward a person. Penalties can include fines, jail period, or restraining orders from the victim and his/her entourage for bullies.

How to secure your family members from cyberbullies?

A wonderful way to protect your teenage girl or boy from cyberbullying and its horrifying effects are using parental control apps. What is it? It’s a secret app that tracks the activity of the targeted phone and grants you instant access to messages, social media accounts, and friends, multimedia files, and more.

A main aspect of abuse is secrecy, and victims are rarely open to discussing it. It involves a specific psychological dynamic called aggressor-victim, and it can be hard for your child to reveal if they are targeted by a cyberbully. A monitoring app allows you to check their texts, phone calls, date and time when they were sent, photos and videos that they send and receive, etc.

A professional tracking app will let you make sure your daughter or your girlfriend is safe on the internet, to see if their Snapchat account is targeted by mean comments or if their Instagram posts are receiving offensive remarks.

If you suspect that something is wrong with your child or significant other private life, a cell phone monitoring app will give you all the answers that you’ll need. In case of a real cyberbully who is terrorizing your child, the screenshots and info received via your tracking app confront him/her personally and put an end to the abuse.

Cyberbullying statistics are giving reasons to alarm for a lot of teenagers’ parents, especially the ones raising daughters. From body-shaming, name-calling, and sexual harassment, adolescent girls are navigating a dangerous environment on the internet and the abuse can even be coming from their peers.

The odds of getting a sincere conversation with your teen are best when starting a conversation around your concerns. In case they are not open to discussion, you can get a cell phone monitoring solution that will let you calm your worries or give you the answers to proceed with a legal or formal procedure.

Tom Richardson
Thomas is an expert in cell phone monitoring software. He has tested and reviewed many spying tools. Now he shares his knowledge and tips to PhoneSpyApps readers. When Thomas has free time, he reads and watches materials dedicated to online parenting control, cybersecurity, the latest innovations and developments in the spying apps market.
Tom's Blog » Digital Age Statistics »
Leave a Comment Cancel Reply