It hurts so much when you put your heart and soul into a relationship just to have your partner cheat on you. In today’s world, cheating has become fairly popular. It cuts across people of all ages and even gender. Compared to the past, where only the male gender was suspected of practicing infidelity in partnerships. The number is even expected to soon surpass that of males.

There are so many celebs who break up nearly every day due to infidelity cases. That only serves to highlight the fact that the amount of individuals involved in cheating is significantly higher for the public. This article contains pertinent cheating statistics that will help to analyze the demographics of cheaters in a relationship.

These facts may help you understand why your spouse may think of having an affair and, importantly, help you focus on your flaws before it occurs. 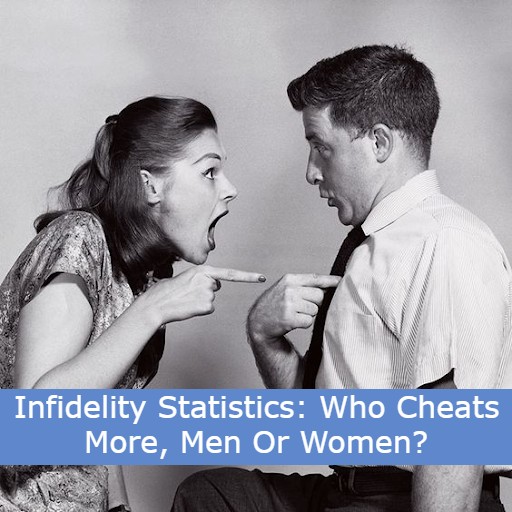 Infidelity can be described as the act of not honoring the pledge to be faithful to your partner. Infidelity is not just an issue affecting married couples, unmarried partners also suffer from infidelity. So long as you had a promise to be faithful, and you failed to honor it. A partner might be tempted to flirt with someone online that is not infidelity, so long as you don’t make arrangements to meet and sleep together.

Why Do People Cheat?

Infidelity might have taken place among approximately 40 percent of couples in marriages. There is a good number of issues that contribute to cheating among married couples. A study which was successfully conducted in 2017 and published in The Journal of Sex Research questioned 495 persons who cheated in their romantic relationship about their motivations for cheating. Infidelity is fueled by several factors, according to the study. Learn more:

Different genders have different factors that push them to cheat while in a stable relationship. Men are most likely to engage in infidelity for a variety of reasons, including a desire for validation and narcissistic behavior. However, no single element has been proven to influence men’s decision to practice adultery. Generally, men’s reasons for adultery will change as their life circumstances change. Some men will only be faithful when broke, but once their pockets are full, they start cheating on their spouses.

Women, on the other hand, will get involved in cheating mostly to fill their emotional voids. The female gender is naturally emotional, and anyone who supports them emotionally will win their hearts. According to GSS statistics, the percentage of women who cheat increased by 10 to 15 percent between 1990 and 2010.

All said and done, it’s better to stay with someone you can trust or, better still, stay single than living with a cheating partner. There are several free spy applications that can help you figure out if your partner is cheating or not. The results will help you decide whether you can stay and make things work, or just leave.

Infidelity Statistics You Should Know

It’s true according to research that men cheat at a higher rate than women. The 2018 general social survey report indicates that 20% of men in marriages have been unfaithful at some point in their relationships. The same statistic also shows that 13% of women in marriages have cheated on their partners. It is thus safe to say that, currently, women rank lower on the infidelity scale compared to men.

In a different survey on attitudes towards infidelity, the percentage of individuals that think infidelity is wrong stood at 79% by 2014. However, the number of unfaithful married couples varies based on factors such as the age bracket of their spouses; the data collected indicated that younger couples were plagued more by infidelity than older couples. In case you suspect that your spouse is having an affair, check our following post and know if your girlfriend is cheating.

On the other hand, approximately 40% of unmarried relationships are affected by cheating. The reason behind it is most of them are not committed like couples in marriage do. A good number of unmarried partners also find it fun to try out different relationships.

How Common Is Cheating in Marriage?

What Rate of Affairs Are Discovered?

Adultery is not a new issue among couples globally, most of them have been caught at least once. Now, picture the number of extramarital affairs that would be documented if everyone was caught. So, if you are playing about it, you might want to rethink it. Anyone in an extramarital affair can be discovered in a variety of ways.

According to Hackspirit, extramarital affair stats for 2021 indicated that around 44% of women in marriages and approximately 22% of married men have had affairs with someone they both know. Also, around 53% of women and 70% of men have cheated more than once.

Is It Possible to Catch a Cheater?

Now that cheating is now a common occurrence, partners have opted to find ideas for reducing it. Some sit down and dialog to come up with a viable solution. While the majority of spouses decide to go for other modern ways to catch their cheating partners by reading this guide.

Experts have developed a good number of modern methods. Your spouse’s explanation for why they cheated may not make you feel any better, but you should find a reason to forgive him or her. The fact that he/she recognized their error may persuade you to stay. You will have the confidence to go for the next step.

What Should You Learn from Infidelity Statistics

Anyone in a relationship can be affected by infidelity at any point, however, it doesn’t indicate the relationship is over. This post allows you to understand that you are not alone if this happens to you. It is important to always try to talk with your spouse when you find them cheating. This will always help you come up with healthy ways to solve the issue.

Tom Richardson
Thomas is an expert in cell phone monitoring software. He has tested and reviewed many spying tools. Now he shares his knowledge and tips to PhoneSpyApps readers. When Thomas has free time, he reads and watches materials dedicated to online parenting control, cybersecurity, the latest innovations and developments in the spying apps market.
Tom's Blog » Digital Age Statistics »
Leave a Comment Cancel Reply